ARIS is great, but not always straight forward. I forget this since we have grown together over the course of a decade.

In particular, ARIS authors are faced with a bit of difficulty deciding which kinds of “game objects” to use when creating games and other experiences (plaques, conversations, items). A recent post to the forums the questions I’m sure thousands of other authors have faced.

Although the manual and other places do go over technical differences between plaques and conversations, this isn’t helpful enough. So here I’d like to share a bit of practical advice about choosing game objects.

First, there is no one right answer. ARIS is very flexible, an open ended system for creating augmented reality experiences. Do what seems good to you. Chances are you’ll figure out something I haven’t.

But, especially for newcomers, it’s nice to have a good place to start.

I use plaques until I really need something else. They are the simplest, easiest to create and use objects in ARIS. The way they show up for players in the client is similar to what you see in the editor. And yet plaques are still powerful. Already with plaques you get a deeper interactive system than with other ar tools like Aurasma.

So what can a plaque do?

At minimum, a plaque presents the player with a title, a bit of media, and some words set below on the screen. 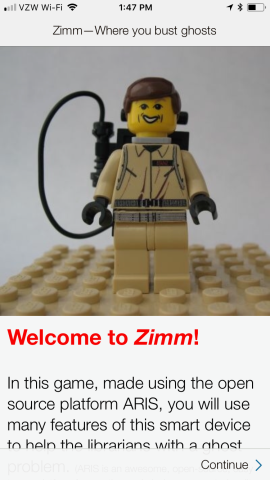 So 99% of my plaques look like this one above, with an image on top and some text below (there is a bit of HTML to make the big, red font and paragraph spacing). When the player is ready to move on, they tap “continue”. It’s very simple for them and me.

And within this format, an author can do a lot of storytelling. Plaques can represent turns in a conversation, quests being given, informational plaques, and so much more. The best advice I have for authors is to not let our vocabulary words limit their imaginations when it comes to representational metaphors.

A plaque’s media need not be an image. A great and also simple use for plaques is to present video (or audio, but it’s clunkier). Putting videos in plaques may help you ditch text all together (note too that video playback in plaques is full screen by default, making them more immersive than videos inserted as character media which are constrained to vertical orientation within the existing conversation window).

A third thing plaques can do, and where the simplicity of plaques lets authors quickly make use of advanced interaction in ARIS, is “edit events” (blue button in the screen shot above). To a first approximation, “edit events” allows authors to give and take items to and from the player upon viewing the plaque. Interactions with hit points, keys, money, etc. are quite simple to put together.

There are far more advanced things you can do with events too, like change the whole game world for all its players (not just each one who encounters the plaque). There are also other places you can use events. But giving and taking items from players is already a lot to play with. And running events from plaques makes their execution simple too.

Finally, the text field in plaques can accommodate HTML and JavaScript. You can use HTML to customize the presentation of text, bold, italics and so on.

Javascript can be used to do just about anything. In the example above, we use it to make the device vibrate upon opening the plaque. ARIS even has its own JavaScript library and documented examples to do things like present leaderboards or insert the player’s name into text.

Starting with plain text then going to HTML and Javascript, all within the same part of ARIS, a lowly plaque, is an awesome way to start simply and ramp up into complexity. And these skills will transfer to other places too! Most text fields in ARIS have the same power of parsing code, and these languages have a few other uses too.

Again, my first advice to ARIS authors is to use plaques until you really need something else. They can do so much!

Another thing authors gain by sticking to plaques early on is learning the other functions of ARIS, especially triggers and locks, in a simpler context.

Triggers – How the real world and game world meet

Plaques (and pretty much everything else) are accessed through triggers. The starting point is to assume that every plaque needs a trigger. The most common kind of trigger is a location. As an author, you would create a location in the real world for your plaque, a place where the player could find it, by creating a location trigger and pointing it at the plaque in question. Until you have a trigger (or some other connection), your plaque exists in the game world but cannot be reached by a player.

There are many other kinds of triggers too, from QR codes, Bluetooth beacons, timers, and even AR triggers that work by the camera matching a given image to one the author sets. My previous post on the design of Zimm shows a few of these in action and the manual lists them all.

The notion of sequence in ARIS is determined entirely by locks, and this is another area where your initial assumptions may not line up with how ARIS is set up. By default, any trigger (in a scene—until you really get into ARIS, just use a single scene; they are messy) is always available to every player, even if they’ve already seen what’s there. Without locks, the game world is static. This is similar to many tour making apps, like Aurasma.

With locks, you go from tour to game. Real interaction becomes possible. Basically, you put a lock on a trigger by specifying the key that opens the lock, i.e. what the player needs to do or have in order to make the trigger accessible. You can lock triggers you’re done with, open up new triggers as the player progresses, and make triggers conditional upon pretty much any condition ARIS can keep track of. The manual and its tutorials have further details on their use.

Although there are other objects and mechanics for ARIS authors to explore and exploit, in many situations you can use plaques to accomplish the functions of these other, more complicated features. This is a great way to limit the complexity of your learning adn the design you are hoping to realize.

Below, I detail a couple examples of this, why I often use plaques in lieu of quests or conversations, even though I know ARIS quite well.

Plaques instead of quests

The Quests feature in ARIS is quite powerful, and equally complicated. I typically remove that tab from my games. I can accomplish the job (notifying the player of their progress and goals) with plaques and appropriate locks, telling the player at certain times that they should be doing something in particular or relying on them to move forward if the available options give them little choice. Making a few plaques to communicate game state is way easier than figuring out this whole panel:

This takes longer to learn than it looks; quests are complicated-just use plaques!

Plaques instead of conversations

Authors often have a hard time deciding if/when to use a plaque or conversation. My general rule of thumb is:

Use a conversation if it needs to branch or page. Otherwise use a plaque.

The choices in conversations allow players to take different paths within them, and they also allow you to create a layered experience (page-ing), switching out text and media with each tap by the player. They are the main reasons, I’ll go to the trouble of using a conversation instead of a plaque.

The one other consideration is appearance. Instead of text below an image, conversations fill most of the screen with their image, and layer text over that semitransparently. Conversations need more specific image aspect ratios and the bottom part of the image can’t be important because the player won’t always see it. But they also, in blending visually, look a bit fancier. The text players tap is also customizable in conversations, but not plaques (well, maybe but I haven’t gotten an answer as to how). In a plaque, the player moves forward by tapping “continue” but in conversations you control not only the number of ways to continue but also the text that is used. You can use something like “tell me more…” as a more evocative option, or use other languages aside from localizing everything, even when you don’t need a branching interaction.

So that’s a basic rundown of what plaques really can be and why they are a good first choice for beginners and veterans of ARIS alike. If you’ve got other questions about them I’d be happy to hear. Or too, if you have a different set of default design pathways with ARIS.

What other areas can I hope to provide this sort of practical advice in, or otherwise share contexts of AR learning design, not just technical details?